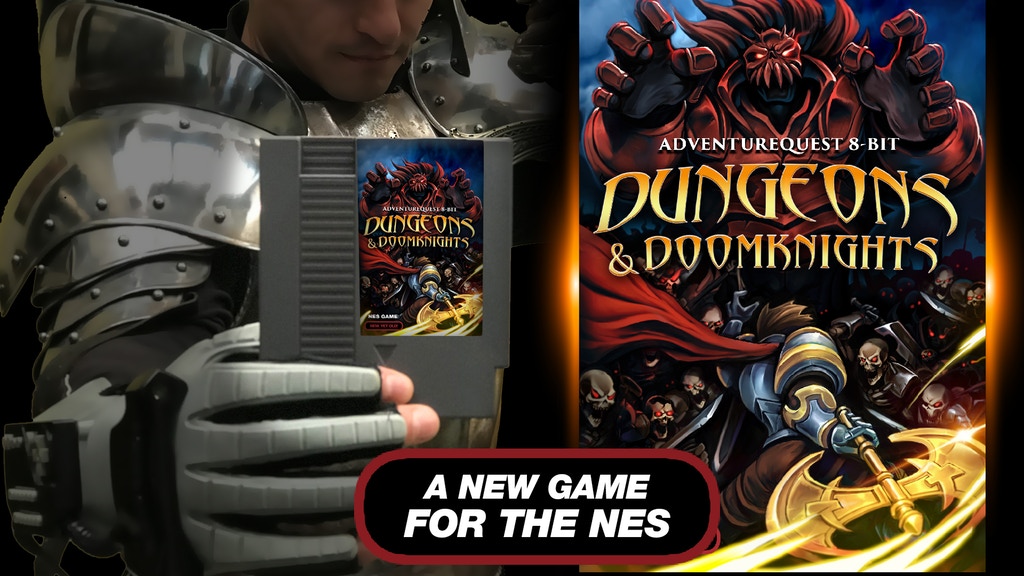 We need a trailer! ... and thanks to you, we were able to get the voice actor, George Lowe (Voice of Space Ghost Coast to Coast, Robot Chicken, other Adult Swim Shows) to narrate it. It is insane that I contacted him Monday night, and as I type this he already finished recording it in the studio. I wrote a trailer script. But he goes off the rails... a lot. You never know what he is going to say instead of the lines written on the page. Which makes him hilarious, and a lot of fun to work with. It is going to be interesting producing a final cut this weekend. Let me show you what I mean.

Good news! Rolith just got our older NES game demo working in a web browser.  So, Digital Backers and above will be getting both the Dungeons & DoomKnights ROM file, and also access to play it on a web browser. Let's see what else we can get it to play on.

One of the most important things our studio does, is listing to player feedback and taking action. I created a YouTube video for you and the community where we open up about this amazing project, answer questions, and share the behind the scenes things that everyone should know.

Thank you again for being a part of this crazy story.

Artix & all of your friends at AE

Hope you had an incredible weekend. As I write this Dungeons & DoomKnights is now over 500% funded. Way to go! Thank you and congratulations!

This weekend we have been working on new monsters and re-organizing how we store our backgrounds. I think the people following me on Steam our Artix Discord Channel finally figured out that on weeknights and weekends when they see I am "playing" Asesprite, that I am actually working on Dungeons & DoomKnights. Asesprite is a tool for pixel art. While it might be a little bit of overkill for an 8-bit game, it has some pixel perfect features that have made it a better suited for this project than my first love, Photoshop.

Please enjoy a sneak peek preview of the audio from the upcoming Dungeons & DoomKnights trailer.

Please let me know if you liked it and got a laugh. I have been assembling the footage... which, has a few comical extra steps. For example, here is what I have been doing to keep the pixel art in the video crisp. First, I record gameplay from an emulator. NES games are 256x240 pixels. Which is pretty tiny. Then, I open it in Adobe After Effects, and scale it up to high definition size using "draft mode." I discovered I had to use draft mode because it keeps those crisp, hard edges. Otherwise, it would try to smooth and blur the edges... which certainly makes sense for regular video. Then I open the footage in Adobe Premiere to do the actual video editing. This might be useful information to anyone making their own Trailers, Let's Plays, or Game Play videos of 8-bit stuff who records the raw footage at the tiny native size and needs to blow it up to HD or 4K.

I am not sure how into retro games you are. You might be brand new to it... or already submerged to your eyeballs. But, I want to talk about your ears. There are so many metal, techno, and orchestral versions of retro game music available now. Simply Google search your favorite retro game's name (ex: Zelda, Castlevania, Metroid, Wizards & Warriors, etc) with the words "theme song" and "metal" and feast your ears on the glorious results. Lindsey Stirling's Zelda dub-step violin cover ranks among my top 10. I was surprised to find there are huge numbers of tribute & remix albums like this available for stream on Apple, Amazon, & Google Play Music too if you have any of those.

In other news, it turns out we were not the only retro Kickstarter to launch on April Fools. Jeffery Wittenhagen from the VGBS podcast started one for a book for Nintendo's red-screened step-child, the Virtual Boy. If you loved this system, be sure to check it out. It ends in less than 44 hours.

On a final, unrelated topic. I really love video games. Playing them, making them, talking about them.... even just staring at the covers. When I was young, I would spend hours at a game store systematically going through the isle... picking up and flipping over each and every game to study it. OK, confession-- I still do this. I really get inspired just looking through games. Do you feel the same?

CONGRATULATIONS! YOU DID IT!

On behalf of all of us here on the AdventureQuest 8-bit team, thank you for 100% funding the Dungeons & DoomKnights NES game!

This is no joke. It's actually happening!

"This is the kind of funny success story we will be telling for the rest of our lives."

You are now officially a part of the craziest thing our video game community & studio has ever done. They thought it was a joke. "Haha... it says you're making a new AdventureQuest for a video game system that was released 34 years ago? Good one." Then they realized, it's real. "WHAT!?," they said, "But, but, but... you can't launch a Kickstarter on April Fools day... are you crazy!?" Yes. We are. This is happening. Most importantly, they underestimated you. Somewhere between your incredible sense of humor & love of video games, you defied all of the odds, rationality, and pulled off the best reverse-prank in the history of April Fools. You just funded Dungeons & DoomKnights: a new 8-bit AdventureQuest it in 3 hours! It's real, and it's happening.

What to expect next!

If this is your first Kickstarter, then here is what to expect. The Dungeon & DoomKnights Kickstarter will continue running for the full 30 days. They don't actually charge your card until the end. I will be updating you with regular (and slightly funny) progress reports through Kickstarter. We are about to embark on a most unusual journey together :D

Thank you and... Battle On!